Boomin Is Coming & We’re Part Of It 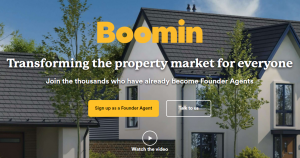 Boomin, set up by the founders of Purplebricks; Michael and Kenny Bruce, claims to shake up the property portal world, claiming to be the ‘most powerful property site ever’, taking on the big names of Rightmove, Prime Location and Zoopla. They duo, who took the estate agency world by storm with Purple Bricks have set some big targets for Boomin, which they think will transform the property market for everyone, especially buyers and sellers. The good news, Open House Estate Agents and Open House Wigan are already a part of it!

Boomin is set to be the ‘most powerful property site ever’, a big claim which we’re sure, based on Purplebricks success, will hold some weight. This is major news for the property market, with a new contender in ‘The Big Three’; Rightmove, Zoopla and Prime Location. At Open House Wigan, we’re delighted to already be signed up, ready to list on Boomin, meaning we’re extending our offering even further; listings on the (what’s set to be) ‘The Big Four!’; Rightmove, Zoopla, Prime Location and now Boomin.

We’ve secured listing deals with Boomin ahead of schedule, which means we’re primed and ready to list, well ahead of most estate agents. If Boomin is as successful as the industry expects, then your property listing will be a part of it at ground level.

Let’s face it, the existing property portals do exactly what they need to, which is why they’re stiff competition. Boomin plans to stand out with extra features such as ‘Sneak Peak’ and ‘Match Maker’.

These new features will connect potential buyers with properties way ahead of the market, which is great news for sellers, as it helps build up an audience of actively seeking property searchers!

Open House Wigan Will Stand Out With Boomin

Up to press, there are less than 1 in 3 agents ready to list properties with Boomin, with Open House Wigan, part of the national Open House Estate Agents network already set up and ready to go. That means that, if you list with us, your property could pick up some prime online real estate on this new platform, helping your property stand out from the crowd and put it in front of new potential buyers, in big volumes.

We’re sure that other agents will pick up the slack, but in the meantime, Boomin offers a brilliant opportunity to get properties ‘in at the ground level’.

The Bruce brothers, formerly of Purple Bricks have already made waves in the property industry, with big things expected for Boomin too, which is why we’re really excited and pleased to be offering this additional portal to our new customers.

Boomin is looking to stand out from the existing property portals out there with some interesting new features, set to appeal to would be buyers and drive traffic to listings. Here’s a guide to their proposed features, including ‘Secret Properties’ and ‘Sneak Peak’:

Secret Properties is designed to connect buyers with properties before they go onto the general market. Agents will be able to list some tantalising details, but not enough information for home buyers to identify the property outright. This means they’ll need to register their interest, for further information which can be followed up on if and when the property comes onto the market.

This is a great option for sellers as it creates a stream of leads that good agents can follow up on, as well as providing an early marker as to how in demand a property could be.

At Open House Wigan, we use social media to market properties in a similar way, building up a list of would be buyers, eager to find out more about certain homes, so we’re sure Boomins Secret Properties feature will be a hit!

Sneak Peak offers buyers a look at properties before they go onto the general market and other portals such as Rightmove and Zoopla.

Selling With Open House Wigan Has Never Been Better

At the moment the property market is hitting record numbers, with a peak in demand throughout the country, including Wigan. Savings on stamp duty and a captive audience have driven up property viewings nationwide, with portals such as Prime Location reporting record traffic over the last few months.

With the addition of Boomin to our portal offering, as well as an effective hybrid strategy, that includes social media marketing and listings on the big three property sites, there’s never been a better time to sell your home with Open House Wigan! We’re still offering fixed fee and no sale, no fee options, as well as No VAT and 24/7 customer service.